The Work of the Writer

We live in a fragmented world because our consciousness is fragmented. How do we defragment?

As writers we sometimes take things apart, deconstruct to understand, but in Western culture we forget true understanding comes from seeing the whole image.

All the king’s horses and all the king’s men couldn’t put Humpty Dumpty back together again. But that’s not their job. It’s the work of the sacred feminine to make whole. It’s the act of allowing that does this.

We are stitched together in the wombs of our mothers. But we existed whole in the imaginal realm first. It’s the work of the feminine energy to take this pattern and enflesh it or flesh it out.

Whether you’re a man or a woman it is feminine energy that allows things to come together, for it is more of an allowing than a making. A mother doesn’t make a baby, but her body allows it to become.

As writers in a fragmented world, we allow works of wholeness to be made through us. There are active and passive moments during the creative process, but overall, to reveal wholeness, we must be open and allow what needs to come through to do so. And each work we create is another stitch binding us back together again.

Posted by Joanne Young Elliott at 6:08 PM No comments:

Choice, Commitment and the Writing Journey 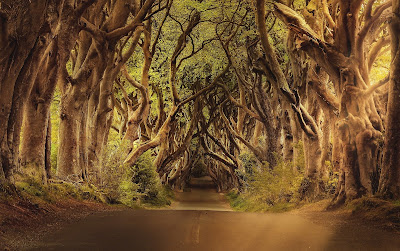 I’ve had many starts and stops in my writing career. Now I hover at yet another turning point. But quitting isn’t in my blood anymore.

I started writing early. Once I got through two years of special reading instruction in grades two and three, I began writing. My first attempts were plays. I liked to perform shows in my basement as a kid, so I thought why not write them. That didn’t last long. I went back to reading stories and making them up in my head. I think that’s when perfectionism first started to get in the way.

At 13, when I discovered magick and witchery, I also found poetry. My eighth grade English teacher really liked the Haiku I wrote. It was fun for a bit, and then I went back to reading and daydreaming. I also let magick go and became agnostic.

It wasn’t until my early twenties that poetry reemerged. I also took a community education class on writing magazine articles. I wrote a little but soon gave it up. That’s when I decided to go back to University for a BA in English. I knew I had a lot more work to do in order to become a good writer.

The thing is I could have been a good writer by my mid-twenties if I’d not given up so many times. Perfectionism and lack of confidence have been with me for a long time. I let them stop me from doing something that has always wanted and enjoyed doing.

After I graduated from University, I started writing a romance novel. I finished it about two years later and sent a query with chapters to Harlequin Romance in England. This was big for me. I even did a success spell (magick had come back into my life at this point) so it would rise to the top of the query pile.

Three months later, I received a very nice rejection letter. They told me the writing was fine, but it just didn’t have heart. I gave up and went back to reading and exploring alternative spirituality.

Eight years later I started and finished another novel. This time, an urban fantasy tied to the 2012 awakening. I sent this one to more than one agent. After about seven rejections I gave up. It was almost 2012 anyway. I started an online business and continued to read a lot.

Again, if I had just kept writing instead of giving up, I would have been further along.

The online businesses included editing books and writing copy and articles for companies. Those didn’t last that long either. I was too much of a perfectionist for editing and I hated getting paid so little for writing. But I didn’t quit writing this time. About five years ago I sent out a few poems and got two published. I also sent out spiritual articles and got one published.

But then I hesitated. Finally, I started a blog then another and another to encompass all the areas I was interested in writing about. I created an email list where I shared my most personal writings, and through this I finally developed my voice. Four years after my first publications, I got published four times. But that was a year ago.

I’m at a crossroads. I’m hesitating again. Six months ago I went back to coaching writers, this time in writing instead of online marketing. I enjoy coaching writers. Being of service is just as much a part of my nature as is writing. I know I won’t give up writing. I’m doing it every day now. Is it fear or perfectionism that has me standing still when it comes to publishing? I’m coaching myself in real time here.

Life is made one decision at a time. Each decision is a commitment woven into the pattern that unfolds before our eyes. Choice is never a curse because we can always choose again. The pattern can be unraveled and rewoven. But nothing moves forward until we decide our next step. It can be tiny. But we must take it.

This moment of indecision is not about giving up writing, but it is about giving up something to make room for it. And that’s why I stand here not knowing the next step. The one thing I’ve never done in all these years is fully commit to anything except my marriage.

Commitment is exclusive. Commitment is choosing the one road even though you don’t know where it will take you. You have some idea, but there is no certainty. You only know you’re going to follow it because at the end of it is your vision and another crossroads. And even your vision may change before you get there because you change on the way. But none of this happens without commitment. Without choosing.

I choose coaching writers and writing to publish. I can’t coach writers without being in the game myself. I commit to them both. The real choice now is to let go of all the other things. It’s time for more decisions. It’s time to clear the path on these roads. I realize I’ll be living two lives though they are related. This is all the more reason to let go of other things. This is where this season of letting go has led me. It’s time to go within and decide.

Posted by Joanne Young Elliott at 12:50 PM No comments:

I feel resistance to working on my current project. Up until now I’ve mostly written shorter pieces. I don’t resist those as much. I can finish them in one sitting, almost. I write, take a break and then go back and edit. This long essay isn’t that simple. It’s also the first piece I’ll be sending out to paying journals.

I’ve been paid for my writing before, but it was copywriting or ghost writing blogs. It wasn’t my own stuff. Last year I got up the nerve to send my work to online journals that don’t pay. I got published. I have my clips. Now it’s time to get paid. And I’ve resisted. It’s been a year since my last non-paid publication.

So, it seems my resistance may be more about getting paid than the different type of writing I’m doing.

I feel my perfectionism kicking in. I’m afraid it won’t get accepted. I dream of getting paid for my ideas and stories not someone else’s marketing copy or blogs, but I’m afraid I won’t make it. I know my writing is good and yet I have doubts.

Even though I’m experiencing all this resistance, this time feels different. This time I know I won’t give up on myself like I have so many times before.

I will finish my current essay and submit it. I may wait on my muse and approach my destiny as a process, but I will no longer wait for perfection. I won’t give up when it gets difficult. I won’t lose patience with myself. Compassion is needed when our passions get tied up in our fears. I will take the next step and the next as needed. I will let it unfold.

Life exceeds our expectations when we let it. We don’t make things happen. We allow and in that opening everything is possible.
Posted by Joanne Young Elliott at 1:32 PM No comments:

Joanne Young Elliott
Joanne is a poet and writer who has always been attracted to the spiritual realm. From an early age she was playing with words and wondering about the world of spirit. Today she is a spiritual guide and teacher. She calls herself a Word Priestess because she believes in the power of the written word to transform and heal. Joanne is a Licensed Science of Mind Practitioner and an Ordained Priestess in the Fellowship of Isis. She lives with her husband and their two thousand books just outside of Los Angeles.